Laser is a laser emitted from the laser, through the optical path system, focused into a high power density laser beam.The laser beam hits the surface of the workpiece to reach the melting or boiling point, and high-pressure gas coaxial with the laser beam blows away the melted or evaporated metal.When the beam moves relative to the workpiece, the material eventually forms a slit, thus achieving the purpose of cutting. 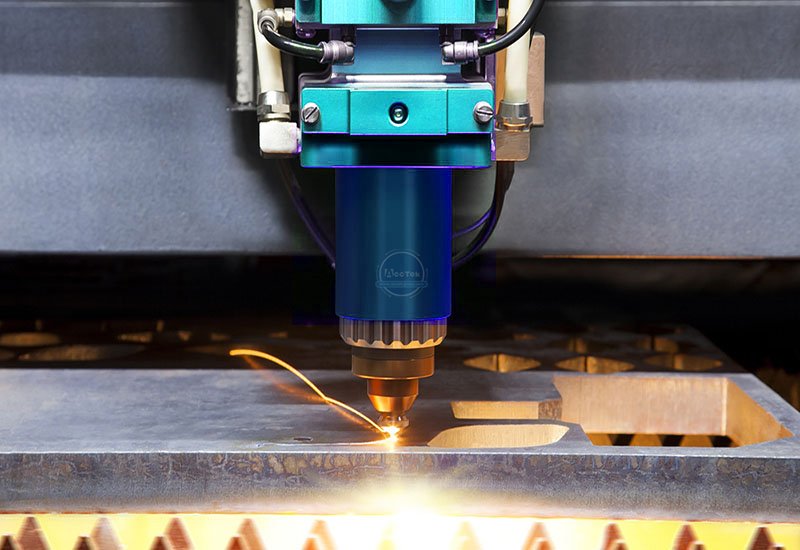 Using high energy density laser beam to heat the workpiece, the workpiece temperature rises rapidly, in a very short time to reach the boiling point of the material.The matter begins to vaporize, forming steam.The steam shot out at such a high speed that it made a cut in the material.The heat of vaporization of materials is generally very large, so laser vaporization cutting requires a large power and power density.Laser vaporization cutting is mainly used for cutting extremely thin metal materials and non-metallic materials.

In the process of laser melting and cutting, the metal material is melted by laser heating, and then non-oxidizing gas (Ar, He, N, etc.) is ejected through the nozzle coaxial with the beam, and the liquid metal is discharged under the strong pressure of the gas to form an incision.Laser melting and cutting does not require complete vaporization of the metal, but only 1/10 of the energy of vaporization of the cutting.Laser fusion cutting is mainly used for the cutting of some non-oxidizing materials or active metals, such as stainless steel, titanium, aluminum and their alloys.

Principle of laser oxygen cutting is similar to oxyacetylene cutting.It USES laser as the preheating heat source, oxygen and other active gases as cutting gas.On the one hand, the ejected gas interacts with the cutting metal, producing an oxidation reaction that releases a large amount of oxidizing heat.On the other hand, molten oxide and molten material are blown out of the reaction zone, creating incisions in the metal.Because the oxidation reaction produces a lot of heat in the cutting process, the energy required by laser oxygen cutting is only 1/2 of that required by melting cutting, and the cutting speed is far greater than that of laser vaporization cutting and melting cutting.Laser oxygen cutting is mainly used for carbon steel, titanium steel, heat treatment steel and other easily oxidized metal materials.

Laser scanning is used to scan the surface of brittle material with high energy density laser, which makes the material evaporate into groove after heating.A certain amount of pressure is then applied and the brittle material will crack along the slit.Q - switched laser and CO2 laser are generally used for laser marking.Fracture control is to make use of the steep temperature distribution generated by laser grooving to generate local thermal stress in brittle materials so that the materials fracture along the grooving.

Pre:Application of optical fiber laser cutting machine in construction industry
Next:How to select cutting head by aperture and the influence of laser head on cutting