Characteristics of laser are briefly analyzed

Characteristics of laser are briefly analyzed

Color of the laser depends on the wavelength of the laser, which in turn depends on the active substance emitting the laser, the material stimulated to produce the laser.Deep rose-colored laser beams stimulated by rubies are used in medical applications, such as skin diseases and surgery.Argon, considered one of the most valuable gases, produces a blue-green laser beam, which has many USES, such as laser printing, and is essential in microscopic eye surgery.Lasers produced by semiconductors emit infrared light, so we can't see it, but the energy is just right to "read" compact discs and use them in fiber-optic communications.Laser separation technology laser separation technology mainly refers to laser cutting technology and laser drilling technology.Laser separation technology focuses the energy into a small space, and can obtain a very high radiation power density of 105~1015W/cm2. This high density energy can be used for non-contact, high speed and high precision processing method.At such a high optical power density, laser cutting and drilling can be done on almost any material.Laser cutting technology is a new cutting method which can get rid of the traditional mechanical cutting, heat treatment cutting and so on. It has the characteristics of higher cutting precision, lower roughness, more flexible cutting method and higher production efficiency.Laser drilling, as one of the drilling methods in solid materials, has become a processing technology with specific applications, mainly used in aviation, aerospace and microelectronics industries.

Energy of a photon is calculated by E= HV, where H is Planck's constant and V is the frequency.So the higher the frequency, the higher the energy.Laser frequency range: 3.846*10^(14)Hz to 7.89510(14)Hz.The electromagnetic spectrum can be roughly divided into:

(1) Radio waves -- wavelengths ranging from a few thousand meters to about 0.3 meters, which are commonly used in television and radio broadcasts

(2) Microwaves -- wavelengths ranging from 0.3 m to 10^-3 m. These waves are most commonly used in radar and other communication systems

(5) Ultraviolet -- wavelengths from 3 ×10^-7 meters to 6×10^-10 meters.These waves are generated for a similar reason to light waves and are often emitted during an electrical discharge.Because its energy is comparable to that involved in ordinary chemical reactions, ultraviolet light has the strongest chemical effects

(6) Roentgen rays -- this part of the electromagnetic spectrum, from 2×10^-9 meters to 6×10^-12 meters.Roentgen rays (X-rays) are emitted by electrons in the inner layer of an electric atom as they jump from one energy state to another or as they slow down in the atomic nuclear power field

(7) Gamma rays -- electromagnetic waves ranging in wavelength from 10^-10 ~ 10^-14 meters.This invisible electromagnetic wave is emitted from within the nucleus, and is often accompanied by radiation in radioactive materials or nuclear reactions.Gamma rays are very penetrating and destructive to living things. 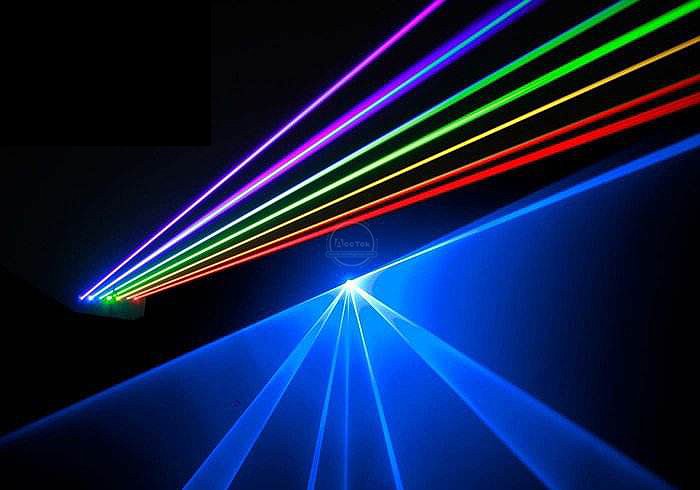 
Lasers are monochromatic. Some lasers can produce different frequencies at the same time, but they are isolated from each other and used separately.Second, lasers are coherent light.The characteristic feature of coherent light is that all its light waves are synchronized, and the whole beam is like a "wave train".Thirdly, the laser is highly concentrated, which means that it has to travel a long distance before the phenomenon of dispersion or convergence occurs.There are many kinds of laser, from the size, the size of the laser is not the same, the type also divided into the following: gas laser helium laser, neon laser and argon laser;Solid state laser has ruby laser;The semiconductor laser has laser diode;And each laser has a unique way of emitting light.

Pre:  What should be paid attention to in laser processing?
Next:  Application of laser cutting and how to deal with cutting fume