What is laser processing?

What is laser processing?

Laser processing makes use of the energy of light to achieve a high energy density at the focal point after the lens is focused, and relies on the photothermal effect to process.Laser processing does not need cutting tools, the processing speed is fast, the surface deformation is small, can be processed various materials.Laser is used for all kinds of material processing, such as drilling, cutting, scratching, welding, heat treatment and so on.Some metastable states of matter, excited by foreign photons, absorb light energy, making the number of higher-level atoms greater than the number of lower-level atoms -- reversing the number of particles.If you have a beam of light, and the energy of the photon is equal to the difference between the two energies, then you have stimulated emission, which produces a lot of light energy. 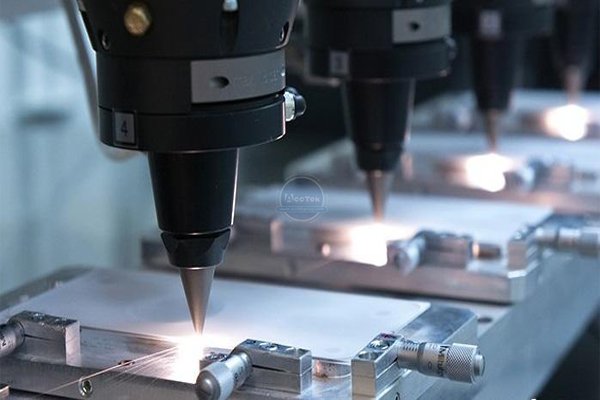 Laser cutting technology is widely used in the processing of metal and non-metal materials, which can greatly shorten the processing time, reduce the processing cost and improve the quality of the workpiece.Laser cutting is realized by using the high power density energy generated by laser focusing.Compared with the traditional plate processing method, laser cutting has the advantages of high cutting quality, fast cutting speed, high flexibility (can be arbitrarily cut shape), wide material adaptability and so on.

The laser beam is coupled to a high purity inert cutting gas so that the melted material leaves the slit without the gas itself participating in the cutting.Laser fusion cutting can achieve a higher cutting speed than gasification cutting.The energy required to vaporize is usually higher than that required to melt the material.In laser fusion cutting, the laser beam is only partially absorbed.The maximum cutting speed increases with the increase of laser power and decreases with the increase of plate thickness and melting point.When the laser power is constant, the air pressure at the slit and the thermal conductivity of the material are the factors limiting the laser power.Laser fusion cutting of iron and titanium requires no oxidation cutting.

The difference between laser flame cutting and laser fusion cutting is that the cutting gas is oxygen.Through the interaction of oxygen and the heated metal, a chemical reaction takes place, heating the material further.For structural steels of the same thickness, the cutting speed of the method is higher than that of the melting method.On the other hand, this approach may be of lower incision quality than fusion cuts.It actually produces wider cracks, greater roughness, increased heat affected areas, and poorer edge quality.Laser flame cutting is not conducive to accurate modeling and sharp corners (risk of burning them out).Pulsed lasers can be used to limit the thermal effect.The laser power used determines the cutting speed.When the laser power is constant, the limiting factors are the oxygen supply and the thermal conductivity of the material.

During laser gasification cutting, the material is vaporized at the slit, which requires a high laser power.To prevent the material from condensing on the slit wall, the thickness of the material must not exceed the diameter of the laser beam.Therefore, the process is only applicable where the elimination of molten material must be avoided.This process is actually only applied to very small areas of black alloys.

This process cannot be used for non-molten materials such as wood and some ceramics, and is therefore unlikely to allow steam to recondense.In addition, these materials usually have thicker incisions.In laser gasification cutting, the optimal focus depends on the thickness of the material and the quality of the beam.The laser power and gasification heat have only a certain effect on the best focusing position.The laser power density required is greater than 108W/cm2, depending on the material, cutting depth, and beam focusing position.The maximum cutting speed is limited by the gas jet velocity under the condition that the steel plate thickness is certain and the laser power is sufficient.

Laser welding is one of an important aspect of laser material processing technology, welding process is thermal conduction, i.e. the laser radiation heating surface, the surface heat to the internal diffusion through heat conduction, by controlling the width of laser pulse, energy, peak power and repeating frequency, parameters such as melting of components, to form specific molten pool.Because of its unique advantages, it has been successfully applied in the welding of micro and small parts.Compared with other welding techniques, the main advantages of laser welding are: fast speed, large depth and small deformation.Can be welded at room temperature or special conditions, welding equipment is simple.

The pulse laser can be used for drilling, the pulse width is 0.1 ~ 1 millisecond, especially suitable for drilling microholes and special-shaped holes, the aperture is about 0.005 ~ 1 mm.Laser drilling has been widely used in the machining of gem bearing, diamond drawing die, chemical fiber spinneret and other workpieces of clocks and instruments.In shipbuilding, automobile manufacturing and other industries, continuous CO2 laser is often used to cut large parts, which can not only ensure the precise shape of space curve, but also have high processing efficiency.Medium and small power solid-state lasers or CO2 lasers are commonly used for small workpiece cutting.In microelectronics, laser is commonly used to cut silicon wafers or narrow slits with high speed and small heat-affected area.Laser can be used to carve or mark the workpiece on the assembly line, without affecting the speed of the assembly line, and the characters can be kept forever.

The surface of the material can be melted and recrystallized by laser irradiation, and the purpose of quenching or annealing can be achieved by selecting the appropriate wavelength and controlling the irradiation time and power density.The advantage of laser heat treatment is that the depth of heat treatment can be controlled, heat treatment can be selected and controlled, the workpiece deformation is small, can deal with the complex shape of parts and components, can deal with the inner wall of blind hole and deep hole.For example, cylinder pistons can extend their life after laser heat treatment;The damage of silicon caused by ion bombardment can be recovered by laser heat treatment.The application scope of laser processing is still expanding, such as laser manufacturing large-scale integrated circuit, without corrosion inhibitor, the process is simple, and can carry out high-precision etching processing of patterns below 0.5 micron, thus greatly increasing the level of integration.In addition, new processes such as laser evaporation, laser zone melting and laser deposition are also under development.

Pre:  Engraving machine common problems and maintenance methods
Next:  What should be paid attention to in laser processing?