Summary and analysis of laser technology!

Lasers have many features that light sources do not:

This kind of laser is so bright that it can shine on objects far away.Because lasers are directional and photons are mostly concentrated in a small range, the energy density of lasers is extremely high.

3. The wavelength distribution range of laser is very narrow, so it has good monochromatism and extremely pure color.

4. High consistency of optical properties makes laser beams have good coherence between them.

Most typical application of laser is laser machining, which can be divided into cold machining and hot machining.Laser focuses on the surface of metallic or non-metallic materials through the lens and other focusing systems, using a high-energy laser to instantaneously heat the material to ultra-high temperatures so that the irradiated material melts or vaporizes part of the modified or deleted material.This kind of processing based on the photothermal effect is called "hot processing".When a high-energy laser beam of a particular wavelength is shone on a material such as a polymer, the photons can start or control a photochemical reaction, a process known as photochemical or "cold treatment".Photochemical treatment is mainly used for photochemical deposition, laser etching and laser phototypesetting.Among them, thermal processing is the most widely used.

Laser processing is contactless, will not produce friction resistance and workpiece surface tools, will not directly affect the workpiece, almost no deformation of the workpiece, and the laser is the local processing, so the impact is very small part of the processing, high speed, high efficiency, high precision processing.Laser processing technology is the combination of optical and electromechanical technology, the laser beam's motion speed, power density and direction can be adjusted, easy to cooperate with the CNC system to process complex workpiece, so as to achieve different levels and different range of applications. 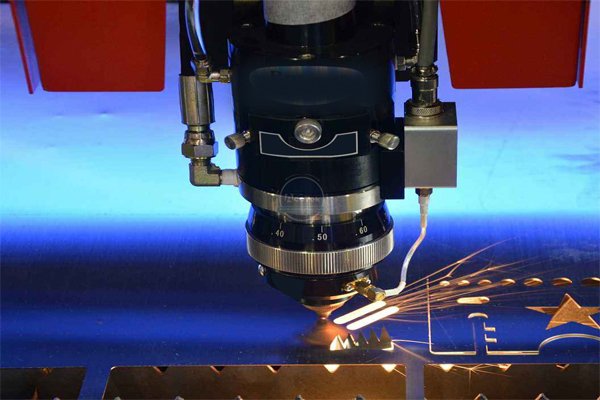 Following is a summary of the various laser technologies:

Laser die-cutting technology is a laser focused, according to the workpiece design in the software, directly on the surface of the material to complete the die-cutting or indentation effect of the cutting method.Laser die cutting technology has the characteristics of high cutting precision, low roughness, short processing time and high production efficiency.Because there is no need to replace the die-cutting, but also can realize the fast conversion between different formats of the workpiece, thus saving the traditional die-cutting adjustment time, especially suitable for thin, shaped workpiece processing.A typical laser die-cutting system should include a laser, a scanning system, a control system, a cooling system, an inert gas protection chamber, a waste removal system and a feedback system.

1. Cut and carve.First, the graphic information is decomposed into countless cutting lines, and then these lines are cut by laser, and finally the image and text represented by the cutting lines are obtained.

2. Mold carving.Remove the picture and text parts of the pattern and keep the outer part of the pattern unchanged.There are two kinds of concave engraving. One is to put the text and text on each point with the same strength, mainly reflecting the text and text information by the outline;Secondly, according to the pictures and words compared with the light and shadow, the dark parts of the pictures and text should be cut out, while the bright parts should be cut out less or even none.

3. Punch and carve.Remove the graphic part and keep the original graphic part. The cutting strength of each point must be the same.This method of engraving is more suitable for expressing the outline of a figure.

Laser welding technology is mainly used for welding metal and plastic products.In the past, most metal welding USES resistance welding technology, but resistance welding has some problems, such as high power consumption, large heat influence area, ugly interface, limited thickness of weldable materials, etc. Therefore, laser welding technology has been more and more widely used.The action mechanism of laser welding metal is to radiate the surface of metal with laser. Through the coupling action of laser and metal, the welded part will melt or even evaporate in a very short time, and then cool, solidify and crystallize to form a weld.

2. Deep fusion welding will produce keyhole effect, that is, when the input laser energy is very large, far exceeding the conduction and heat dissipation rate, the irradiation area will gasify in a very short time, forming keyhole.The pressure in the hole is balanced so that the beam can shine directly on the perforating bottom.The hole absorbs all the energy injected into the hole and melts the metal in the hole wall, thereby forming a particularly narrow and deep weld.In addition, changing the welding parameters will make the weld depth change greatly, so the actual use of deep fusion welding more.

Laser marking is one of the most widely used laser processing technologies.The mechanism is that the surface material melts, evaporates or changes color instantaneously by local laser irradiation on the workpiece, leaving permanent character and pattern marks.Surface laser marking does not produce corrosion, and will not affect the original production pressure after machining precision, thus, laser marking technology application range is very wide, play the underlying principle, system composition of different materials are basically the same, only the experiment to find the most appropriate parameter Settings for each of the different materials can be done by laser marking.

Pre:How to select cutting head by aperture and the influence of laser head on cutting
Next:Common fault of laser cutting machine and its solution