Acctek / HomePage / News / Company news
Laser metal cutting processing technology and classification
Updatetime: 2021-07-12 14:13View:
Classification of laser cutting
CO2 laser cutting machine
During CO2 laser cutting, install a nozzle at the exit of the laser beam to spray oxygen, compressed air or inert gas N2 to increase the cutting speed and ensure a smooth and clean cutting process.
YAG solid laser cutting
YAG solid-state laser cutting has low cost and good stability, but its energy efficiency is generally lower than 3%. At present, the output power of this product is mostly below 800W. The product has a small output energy and is mainly used for punching, spot welding and sheet cutting. Its green laser beam can be used for pulsed or continuous wave, with short wavelength, good light density, suitable for precision processing, especially in the case of pulsed hole processing, it can also be used for cutting, welding and lithography.
Fiber laser cutting
Through optical fiber transmission, fiber laser cutting has the characteristics of high precision, easy maintenance, and fast cutting speed. It has great advantages in cutting 4mm thin steel plates, but the quality of cutting thick plates is poor due to the influence of the wavelength of solid-state lasers. The wavelength of the fiber laser cutting machine is 1.06 m, which is not easily absorbed by non-metallic materials, so it cannot cut non-metallic materials. In addition, fiber laser processing needs to be carried out in a completely enclosed environment, so that the equipment will be restricted. Compared with CO2 laser cutting, it is not common enough and cutting materials are also restricted. 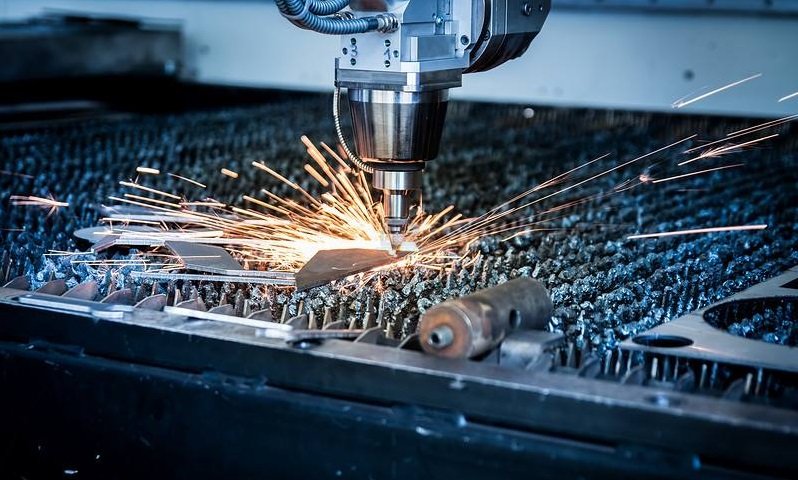 Cutting method:
Laser melting cutting
1) After the workpiece is partially melted by laser melting and cutting, the molten material is ejected by airflow. Since the transfer of the material only occurs in its liquid state, this process is called laser melting and cutting.
2) Laser beam uses high-purity inert cutting gas to force the molten material to leave the slit, and the gas itself does not participate in the cutting.
3) Laser melting cutting is faster than gasification cutting. Energy required for evaporation is usually higher than the energy required to melt the material. In laser fusion cutting, the laser beam is only partially absorbed.
4) Maximum cutting speed increases with the increase of laser power. As the plate thickness increases, the melting temperature of the material increases and decreases inversely. When the laser power is constant, the air pressure at the slit and the thermal conductivity of the material are the factors that limit the laser power.
5) Laser melting and cutting of iron materials and titanium metals have no oxidation gaps. For steel materials, the laser power density for melting without vaporizing is between 104W/cm2 ~ 105W/cm2.
Laser flame cutting
Difference between laser flame cutting and laser melting cutting is that it uses oxygen as the cutting gas. With the help of the interaction between the oxygen and the heated metal, a chemical reaction occurs, further heating the material. For structural steel of the same thickness, the cutting speed of this method is higher than that of the melting method.
Quality of this type of cutting is worse than that of fusion cutting. It actually produces wider cracks, greater roughness, increased heat-affected zone and poor edge quality.
1) Laser flame cutting has defects in processing precision models and acute angles (there is a risk of burning acute angles). Pulsed mode lasers can be used to limit the heat affected zone.
2) Determine the laser power of the cutting speed. When the laser power is constant, the limiting factors are the oxygen supply and the thermal conductivity of the material.
Laser gasification cutting
In the laser gasification cutting process, the material evaporates at the slit, which requires a high laser power. In order to prevent the material from condensing on the slit wall, the thickness of the material cannot be significantly greater than the diameter of the laser beam, so this process is only suitable for use without discharging molten material. This process cannot be used for wood and some ceramics, which usually require thicker cuts.
1) For laser gasification cutting, the best beam focus depends on the material thickness and beam quality.
2) Laser power and heat of vaporization have a certain effect on the best focus position.
3) Under a certain plate thickness, the maximum cutting speed is inversely proportional to the material vaporization temperature.
4) The required laser power density is greater than 108W/cm2, depending on the material, cutting depth and beam focus position.
5) The board has a certain thickness. Assuming sufficient laser power, the maximum cutting speed is limited by the gas jet speed.
Pre:How to apply high power laser to industrial production?
Next: Common processing technology of laser equipment