When the laser working material yttrium aluminum garnet is excited by the light pump (excitation pulsed xenon lamp), it absorbs the light with a specific wavelength. Under certain conditions, the number of metastable particles in the working material is greater than the number of low-energy particles. This phenomenon is called particle number inversion.Once a small number of excited particles produce the stimulated radiation transition, the light will be amplified, and then oscillated through the feedback effect of the total mirror and part of the mirror in the resonator cavity, and finally the laser output by one end of the resonator cavity.The laser is focused through a lens to form a high-energy beam shining on the surface of the workpiece

Electrical system includes a power supply to the laser and a control system to control the laser output mode (pulsed or continuous, etc.).In the latter sometimes also includes according to the processing requirements to drive the table automatic control device.

Function of the optical system is to focus the laser beam on the machining part precisely.

worktable
Worktable is manually controlled or controlled by a numerical control device. It moves in the direction of three coordinates, conveniently and accurately adjusting the position of the workpiece 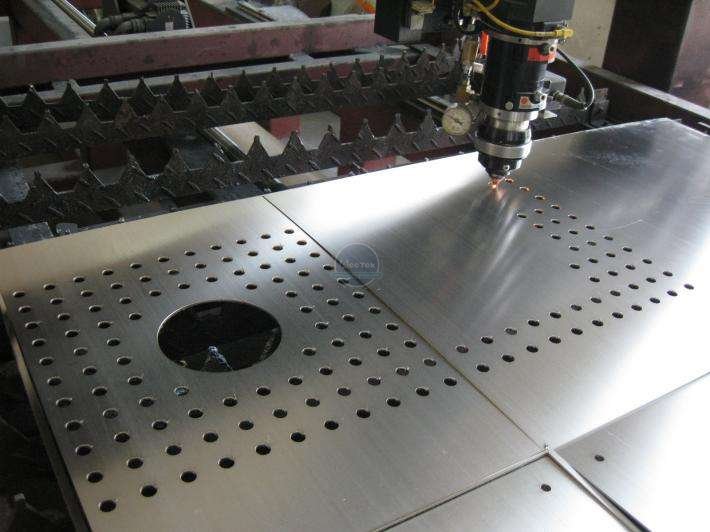 Punching a large number of holes in cemented carbide from 0.1 mm to a few microns in diameter is not easy to do with ordinary machining tools, and even if it could be done, the processing cost would be high.The existing machining technology is to use tens of thousands of revolutions per minute or hundreds of thousands of RPM of high-speed rotating small bits processing materials, with this method generally can only machining holes more than 0.25 mm diameter.In today's industry, it is often required to process holes with diameters smaller than this.In the electronics industry, for example, the production of multilayer printed circuit boards requires the drilling of thousands of holes, about 0.1 to 0.3 mm in diameter, into the board.

How to realize laser microperforation well
Many pulses of light are emitted per second, and the holes produced are of better mass than those produced by a single pulse of light, or by a few pulses of light per second.The principle is that when a hole is punched with a pulse of light per second, or a few pulses, the laser energy required for each pulse is high enough that the material can be heated to melt before the hole can be punched.The melted material, however, does not vaporize adequately. Instead, it heats and vaporizes the material in its vicinity, leaving holes of irregular shape and size.If a high repetition rate laser is used to output an optical pulse, the average energy of each optical pulse is not very high, but due to the width of the pulse, the power level is not low.

In order to make the hole with high quality, it is necessary to pay attention to the selection of laser focus position.The principle of choosing the focus position is: for thick material, the laser beam focus position should be located inside the workpiece, if the material is thin, the laser beam focus should be placed above the surface of the workpiece.
Pre:What is the difference between laser marking/laser engraving equipment?
Next:Laser tablet perforating technology