Laser belongs to non-contact processing, no cutting tool, no mechanical stress, no tool wear and replacement, disassembly problems, can shorten the processing time;Laser head welding does not require welding and filling materials, but also requires deep fusion welding purification.The effect is low impurity content and high purity.For high speed welding and high speed cutting, the focused laser beam has a high power density of 106 to 1012 watts per square centimeter.Using the inertia of light, it can stop and start quickly during high speed welding or cutting.

2. The heat affected area of processed materials is very small

The surface of the object illuminated by the laser beam is a local area.Although the temperature of the treated part is high and the heat generated is large, the treatment period is fast moving, the area affected by the heat is small, and there is almost no unirradiated part affected.In the actual heat treatment, laser cutting head cutting and laser welding head welding process, the workpiece basically has no deformation.It is this characteristic of laser head machining that has been successfully applied in local heat treatment and pipe welding.

Laser beam is easy to focus, diverge and Orient, and easy to obtain different spot size and power to adapt to different machining requirements.By adjusting the external optical path system to adjust the direction of the beam, it is connected with CNC machine tools and robots to form a variety of processing systems that can be used to process complex workpiece.Laser head processing is free from electromagnetic interference and can be processed in the atmosphere.

Laser beams can not only focus, but also focus to wavelength level spots, so small high-energy spots can be used for microprocessing.

5. The workpiece in the sealed container can be processed through transparent medium. 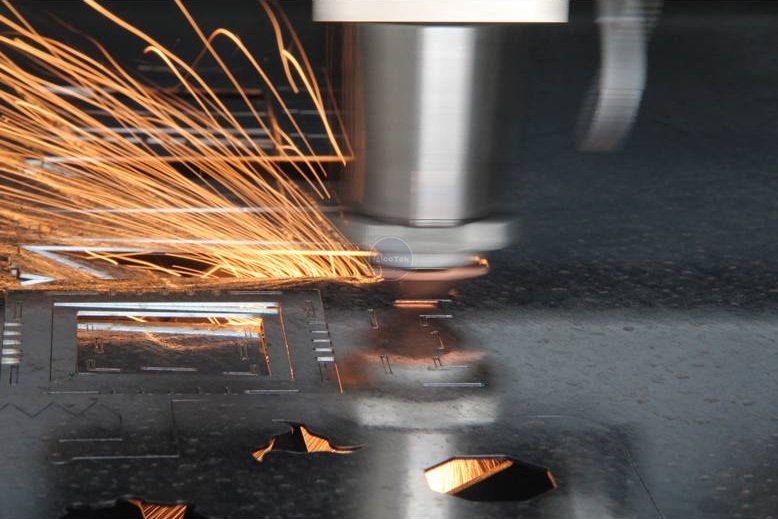 It is a cutting, welding, surface treatment, stamping, micromachining and other technologies.Materials (both metallic and non-metallic) are made using the properties of the interaction between the laser beam and the material.Laser processing, as an advanced manufacturing technology, has been widely used in automotive, electronics, electrical, aerospace, metallurgy, machinery manufacturing and other industrial fields.Improving product quality and labor productivity, automatization, no pollution and reducing material consumption are becoming more and more important.

Laser head machining of welding robots is a processing method in which the focusing laser beam is used as a heat source for bombarding the workpiece and the metal or non-metal workpiece is melted to form holes, slits, joints, cladding, etc.Laser head machining is essentially a process of interaction between laser and opaque material.On the micro level, it's a quantum process, and on the macro level it's reflected, absorbed, heated, melted, evaporated, and so on.Under laser beams with different power densities, the surface area changes include surface temperature rise, melting, gasification, pinhole formation and photoinduced plasma production.

3. Laser head power density is less than order of magnitude

When the laser head power density is less than an order of magnitude, the metal only absorbs laser energy to improve the surface temperature of the material, but the solid phase remains unchanged, which is mainly used for surface heat treatment, phase change hardening or brazing of parts.When the laser head power density is on the order of magnitude, heat conduction heating occurs and the surface of the material melts, which is mainly used for metal surface remelting, alloying, cladding and heat conduction welding (such as thin plate high-speed welding and precision spot welding).

When the laser head power density reaches an order of magnitude, the surface of the material is irradiated by the laser beam, and the heating temperature in the laser heat source center reaches the boiling point of the metal, forming the plasma vapor and being strongly evaporated.Under the action of gasification expansion pressure, the liquid sinks downward to form a deep hole, which melts;At the same time, the metal vapor is ionized by the laser beam to produce a photoplasma.The platform is mainly used for deep beam laser welding, laser cutting and stamping of laser beams.

5. The laser beam power density is greater than order of magnitude

When the power density of the laser beam is greater than order of magnitude, the photoplasma will propagate against the incident direction of the laser beam, forming a plasma cloud and shielding the laser by the plasma.The platform is only suitable for pulsed laser drilling.Impact hardening and other treatments.