The principle of laser quenching: laser beam heats the surface layer of metal, and rapid cooling increases its hardness.The advantage of laser quenching technology is that it requires very little subsequent machining and can process irregular 3D workp

The principle of laser quenching: laser beam heats the surface layer of metal, and rapid cooling increases its hardness.The advantage of laser quenching technology is that it requires very little subsequent machining and can process irregular 3D workpiece.As the heat input is very small, the deformation of the workpiece is very small, reduce or even do not have to do the follow-up processing.

Laser quenching belongs to the surface layer hardening process.Only for iron - based materials that can be hardened.That is, steel and cast iron with more than 0.2% carbon content.

In order to harden the workpiece, the laser beam heats the metal surface layer to near the melting point, which is about 900 to 1400℃ in most cases.When the surface reaches the desired temperature, the laser beam leaves this position and continues forward, continuously heating the workpiece surface in the new direction.At high temperatures, carbon atoms in the metal lattice change their position (austenitizing).Once the laser beam leaves a location, the surrounding material cools the hot surface quickly.This phenomenon is called self-quenching.Due to rapid cooling, the metal lattice does not return to its original shape, but instead produces martensite.Martensite is a very hard metal structure.Converting to martensite improves the hardness of the material.

The laser beam heats the surface layer of the workpiece.Typical surface hardening depths range from 0.1 to 1.5 mm, with some materials reaching 2.5 mm or more.The greater the depth of the surface hardening, the larger the surrounding volume must be to allow heat to be rapidly exported so that the hardened area can be cooled quickly enough.Laser quenching process only requires relatively small power density.At the same time, the workpiece should be machined on the same plane.Therefore, the laser beam should be able to shine on as large a plane as possible.The surface of the square is commonly used at present.Similarly, the scanning mirror set is used in the laser quenching process to move the laser beam of the circular spot back and forth very quickly.A line with basically uniform power density is formed on the surface of the workpiece.A hardening path with a width of up to 60 mm can be generated.The bearing near the turbocharger shaft, as shown above, has been laser-hardened. 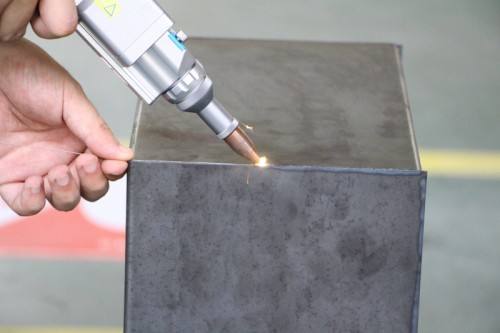 In order to improve the wear resistance of the material or to modify the surface, laser surfacing is used.Using laser cladding system, the surface of existing workpiece can be coated with gold plating with the same quality as casting.No loss of mass, no sealing, no pores and no cracks.

Laser surfacing technology is made very simple by using laser cladding system: on the prepared surface, a pool is generated by laser cladding.The powder material is sprayed onto the surface through a nozzle, and when the new material has solidified, the next layer of welding begins, or the following processing begins.